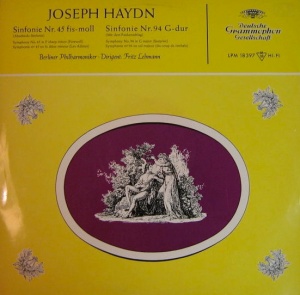 Happy New Year!  Yes, it’s been another long hiatus from posts….this time I think I’ll just have to NOT promise more frequent posts, and hope for the best!

I’ll make this a quick note.  Hopefully some more lp goodies from some of more overlooked of the Deutsche Grammophon stable of 1950s conductors will appear here in due course, namely those by Fritz Lehmann and Ferdinand Leitner.  Starting off with Lehmann, here are some “big band”, yet sensitive and very confidently mounted performances of some classical symphonies for your enjoyment.  The Mozart works were coupled with Ferenc Fricsay’s “Haffner” Symphony, which has been reissued, so I’m not including that.  The “Surprise” Symphony was originally issued on a 10″ lp, but here it’s taken from a 12″ reissue.  The pitch is a bit inconsistent and has some wow, but I’ve tried to catch a few mismatches between movements.

It’s great to be back….happy holidays and best wishes to everyone!

Note:  I’ve given up on Rapidshare,  as many have.  I will probably slowly migrate links to other services and let the RS links die, but for the time being they should still work.  Fileserve seems reasonably free of extraneous irritants such as popups and difficulties accessing files….any opinions?

This entry was posted in Lehmann, Orchestral and tagged Lehmann. Bookmark the permalink.